The restoration of St. Paul’s Chapel began in 2017, led by Facilities and Operations’ historic preservation team, to replace the chapel’s roof and address streaks of salt that tarnished the Guastavino tiles on the interior dome.  To replace the terra cotta roof tiles, the original tile vendor was able to craft precise reproductions with the same shade of green as the original tiles by referencing the architect’s original plans, which were stored in the Avery Architectural and Fine Arts Library. As older tiles were removed, modern waterproofing was installed to prevent any future damage from occurring to the interior of the building.  The project also included the installation of a copper roof on the eastern portion of the building, structural repairs, and façade cleaning. 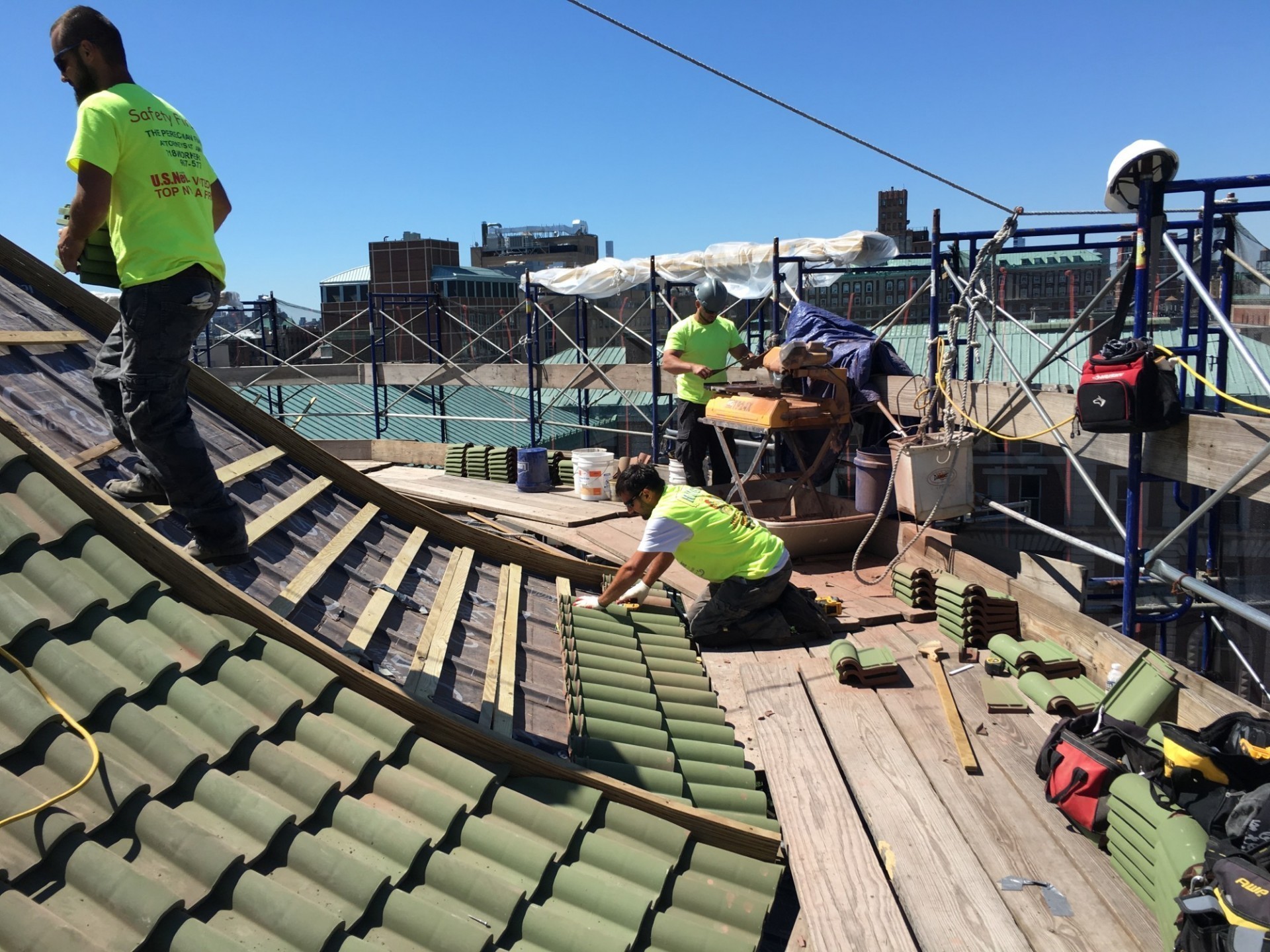 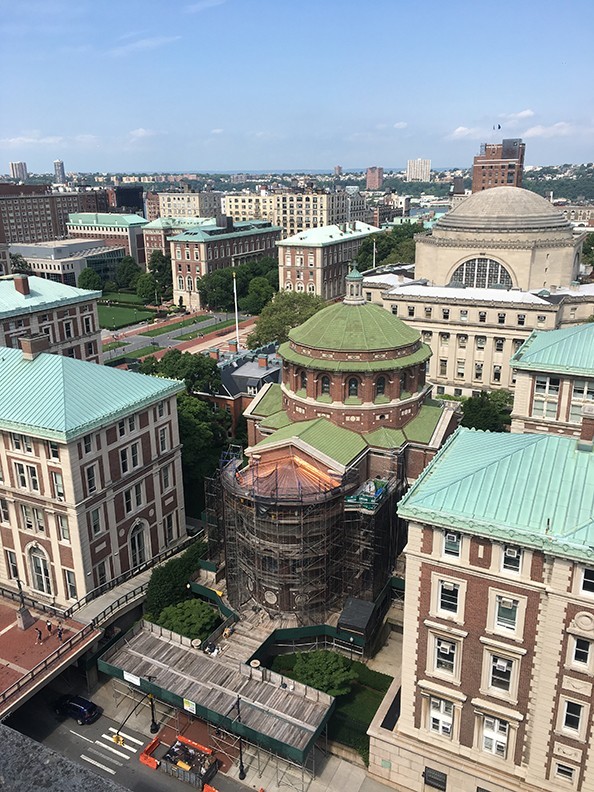 The Chapel's terra cotta roof was replaced and an apse copper roof was installed on the eastern portion of the building.

The chapel’s unique architecture required a complex system of scaffolding to access remote areas of the roof and celling to perform work. Once the scaffolding was constructed, the historical preservation team identified additional building elements that were in need of repair, expanding the project to include the 16 stained-glass windows encircling the dome, which honor important Columbia graduates, including U.S. Senator DeWitt Clinton and Revolutionary War Commander and New York Congressman Philip Van Cortlandt. The windows were carefully removed and sent to a restoration studio for cleaning and repairs, and then reinstalled. The filigree surrounding the dome’s highest point, the oculus, was black at the start of the project, and was polished and re-gilded to allow natural light to illuminate the chapel’s interior.  The renovation was completed in the fall of 2019. 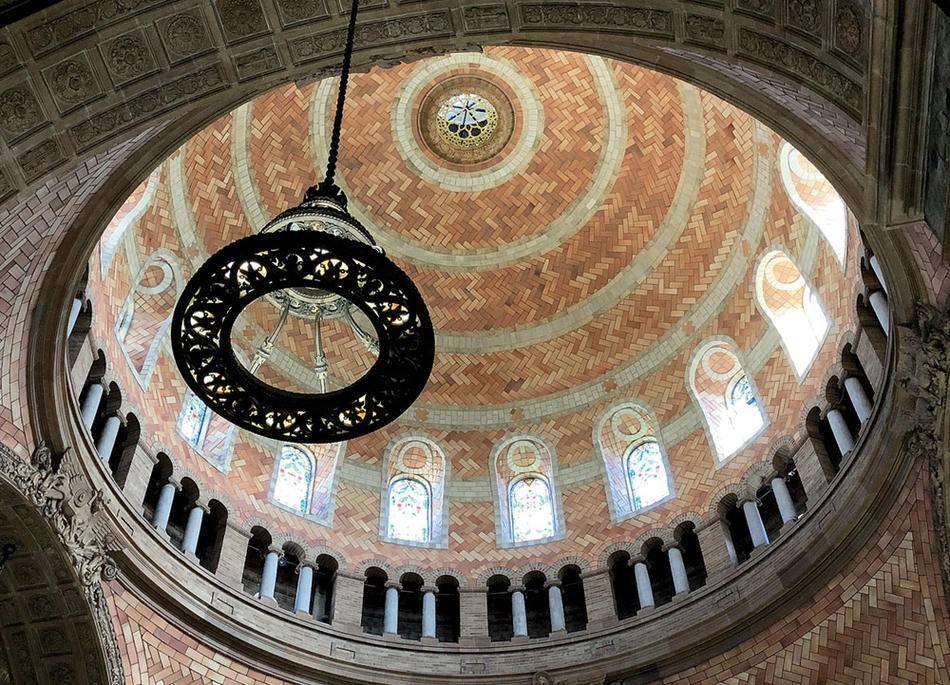 The 16 stained glass windows that encircle the Chapel's dome were sent to a restoration studio for repairs. 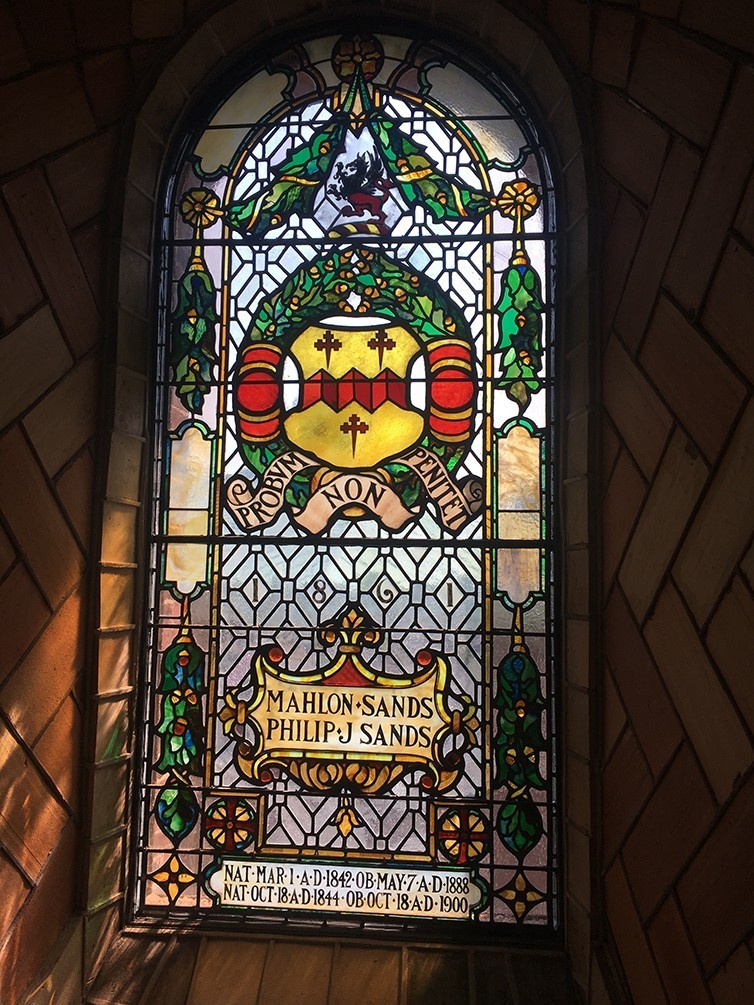 A restored stained glass window inside the chapel dome.

The Guastavino tiles were cleaned, repaired, and replaced as needed, and the dome’s highest point, the oculus, was polished and re-gilded.

Designed by I. N. Phelps Stokes and dedicated in 1907, St. Paul’s Chapel is an iconic campus venue that hosts hundreds of religious and campus events each year, including worship services, concerts, university and private ceremonies. The nondenominational chapel is one of the first buildings to be landmarked in New York City, and one of three buildings that received a landmark designation on the Morningside campus.

The Victorian Society in America is a non-profit organization committed to historic preservation, protection, understanding, education, and enjoyment of nineteenth century heritage.